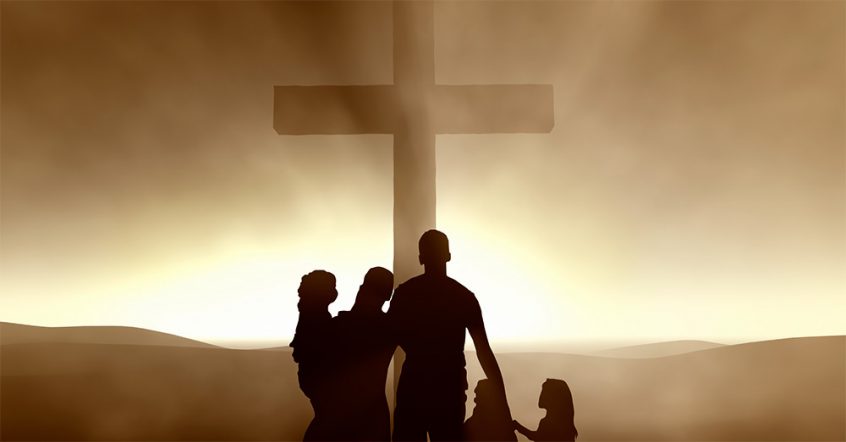 The first man Adam became a living being; the last Adam, a life-giving spirit. The first man was of the dust of the earth, the second man from heaven (1Cor15: 45,47). Have you ever once allowed your thoughts to wander hoping to belong to a different family than your actual one? May be your family is not up to the social level you’d wish to have! Or may be one of your family members lives in evil disgrace! Or may be you wish to belong to a wealthy family, or godly one, famous.

or with large and valuable heritage, or with an honorable nationality. Actually none of us has chosen its own family, but do you know that the holy Bible is declaring today to each and every one that we are able to choose the family we want to belong to? But we only have to make one choice out of two and it’s up to you to decide.

Before making your decision as to which family you’d like to belong to, you’ve got to get to know first the history and the advantage of each of the two families. And what would be your inheritance out of the two as well, in order to make the right choice, especially if it is an eternal one.

Are you submissive against your will or you having the option to choose for yourself?

God has created Adam with a complete free will, he has put him in the Garden of Eden full of creatures and made him rule with dominion over them. (Genesis1: 26-28).

Whatever he wished for was available to him, he also had authority to rule over all the creatures and they did obey him including the wild beast, although they weren’t wild yet at that time but totally harmless. Not to mention that he didn’t have to labor and work with his hands to cultivate the land in order to eat from its fruits. He didn’t know sicknesses nor waited for death or feared it, and above all that he was in total peace with God, enjoying a great rest and an overflowing gladness resulting from a strong relationship with the creator, who listened to his voice and talked with him all the time. Obviously, Adam did enjoy a tremendous start that didn’t last long to be otherwise.

The appearance of the danger robber

Suddenly a danger robber appeared to rob all these advantages, he came hidden to present false offerings, and he tempted him till he obeyed him then he robbed away his freedom and everything else. This robber came in the image of a talking serpent; he was Satan. Surprisingly, Adam felt strange things happening inside him, as his eyes have been opened for the first time to evil. He started to know the sin and consequently, felt dishonored and naked, so he lost his peace with God, felt the urge to hide from Him, from his own condition and his own nakedness as well.

That’s how he started to cover his nakedness, he sewed fig leaves together and made a covering for himself but in vain. That’s how sin entered his life and the life of his whole family (offspring) through him, and as a result he had to acquire the punishment of God’s justice, that says: “The wages of sin is death” (Romans6: 23).

That’s how death, with its three kinds, gets to know its way to Adam and the whole humanity.

1) The Spiritual Death
Is the most difficult kind of death ever faced by Adam which is the separation from God, Adam had been separated from God’s presence, and his fellowship only to face a barrier or a veil that separates men from God.

2) The Eternal Death
The eternal death is the everlasting death in the eternal hell, (endless) a fire that is not quenched and worms that never dies.

3) The Fleshly Death
The fleshly death is the natural death of the flesh and its disintegration in the tomb.

The First Adam died leaving behind him death as our inheritance since we’re his descendants and from his family. But thanks to God who has change the whole picture and the sad ending when he has sent The Last Adam, who gives a new birth certificate for all who join his family. He changed our former inheritance as very special seal seals this certificate which is the blood seal that was shed for the ones he loved.

The Last Adam Is the Lord Jesus Christ who did love all the members of the family of the first Adam. He came to restore all what the hidden robber (the Satin) has taken away. He came to exchange death with life, the disgrace of defeat with victory, he came to rent the veil that separate men from God and to restore peace in order to assure a real fellowship between his new family and God through the Holy Spirit.

But How Could Any body Be Member Of The Last Adam’s Family?

You must be born again in order to be member of the last Adam’s family. It does not mean to be religious or to improve your walking or your style of life it simply means to believe in the Lord Jesus who died and was crucified for you. This will actually happen if you call him to reign over your life. He will come to dwell in you through His Holy Spirit in order to renew your life, giving you a new creation.

New birth happens in one second exactly like what happened with the thief of the cross who had been called by God to be with him in Paradise and with Zacchaeus the tax collector who has been told by the Lord Jesus Christ: “Today salvation has come to this house”.
These people did only one thing, they accepted Jesus Christ as their personal savior and the scriptures say “Yet to all, who received him, to those who believed in his name, He gave the right to become children of God”. (John1: 12).

And now you may ask by saying: What must I do to be saved and have the guarantee of the eternal life?

Now, you need to know these facts:

Lord I need you … I need you to set me free from the slavery of my enemy the devil … only you died for me on the cross … only you is the living Christ who is able to hear me and to redeem me…save me as you are the only savior … I love my lord, my strength … Amen.